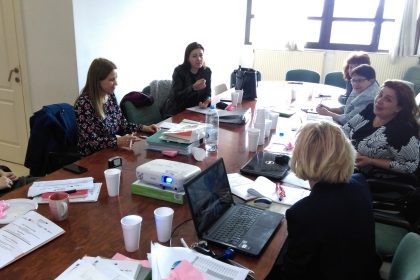 The second meeting of the partners for Project „Reducing access inequalities in primary healthcare for socially significant diseases at CB Area’s deprived communities” with Acronym “EQUAL2HEALTH”, ref. No.2123, is implemented under 2nd Call of Cooperation Programme “Interreg V-A Greece-Bulgaria” 2014-2020“ was held оn the 10th of April 2019. Once again the event was held in the city of Thessaloniki, Republic of Greece. The meeting was again hosted by the Inter-Municipal Agency of the Western Province of Thessaloniki “Nefeli”, Hellenic Republic. The partners’ representatives presented the progress of the activities as well as the various problems which were encountered in the implementation process. For the first time, representatives of the Smolyan Regional Health Insurance Fund took part in the meeting after joining the project at the end of 2018. The RHIF – Smolyan presented their progress on the project activities. The subject of the meeting was to make up for the delay in implementation caused by the change of a partner in the project and the ways to support the substitute partner. The representative of the Joint Technical Secretariat, Ms. Dinkova, welcomed the new partner and provided valuable advices and guidance to their representatives. The next meeting will be hosted by MBAL Devin, Republic of Bulgaria.

The Project is co-funded by the European Regional Development Fund and by national funds of the countries participating in the Interreg V-A “Greece-Bulgaria 2014-2020” Cooperation Programme
This webpage has been produced with the financial assistance of the European Union. The contents of the webpage are sole responsibility of the Regional Health Insurance Fund – Smolyan and can in no way be taken to reflect the views of the European Union, the participating countries the Managing Authority and the Joint Secretariat.